2015 is near its end. This year was quite busy for Knights Province and its creator (me). Gains include:

On the downside however:

All-in-all 2015 was a good year and I’m looking forward to what 2016 brings. Thank you all for support and interest in my humble ambiguous project – share if you like! 😀 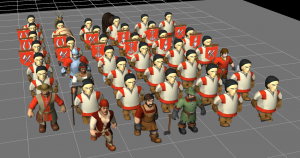 Wish you Happy New Year everyone!!!

Bonus poll: What single feature would you like to see the most in Knights Province next year?