It has been 2 months since last progress report. Hopefully new post will come up much sooner than in April =)

Most importantly – development goes on! I’m still finding time every few days to work on the game, write code, think through ideas, discuss about the game, reply to emails and Skype.

Last week HeavyBrain has made 2 more units – Baker and Carpenter: 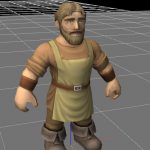 Animating them is a separate task, which may be delayed till Alpha 9 or later. You can notice, that models look a bit different compared to previous units, mostly due to several months span in between making them. At some point I’m going to line up all units and color-correct re-paint details to make them more uniform.

The only remaining citizen unit without a model is Tailor. I’m not sure if he will remain in the game “as is”. There are still doubts about how units get trained/hired in School/Fort/Barracks and wares they require (Cloth, Gold).

Alpha 7 touched unit-hiring topic lightly with introduction of Cottage houses. Intent is to generate serfs for free in Cottages and then train/hire them in School/Fort. I plan for Alpha 8 to fully feature this idea.