Text is boring, how about some pictures?

Before touching anything I needed to tackle the biggest blocker of all – do I still remember 3D modelling and can I possibly make something good enough to be used in a game? At least Minecraft level. 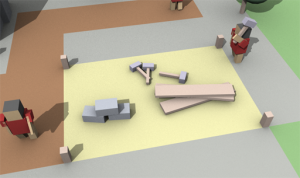 Decision made early on – we don’t want to focus that much on the graphics. We need to sketch the big picture first. Prepare just some placeholders that can be replaced later on. Simple shapes, minimalist style without textures, but with a nice lighting fits perfect. Said that and having no 3D engine around – using 3D modelling applications is the best choice. So let’s get started!

For that I took Lightwave3D – 3D modelling application I was working with back in my racing games modding days. Luckily I had used it a few times during those years, and I still remembered most of the shortcut keys, yay! It took a while to figure out where to start. Starting from scratch, without any pivots or reference points is the hardest part. After a few hours of wandering around, here comes a scene, some ground surface, couple of boxes and a nice ambient-occlusion shader: 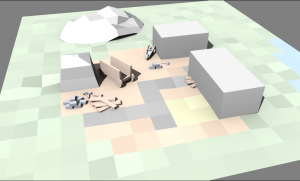 So, how about placeholder town, something more filled with primitive life (if that can be said about such minimalist settings). Declare this box is a house. Of unknown height, unknown width and depth. Some windows, totally out of medieval style.. delete them .. and create a new. We need something to start from, so no matter how ugly, but if they look alike windows – they stay. 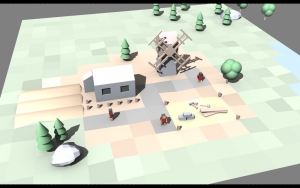 Making that ugly unit took a few days of poking around, deciding if that box resembling a head then are those chunks look like arms, at least proportion-wise .. 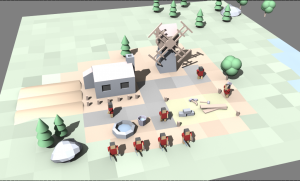 And now there’s even an army force, ready to protect the newly born project xD

This entry was posted in Early plans. Bookmark the permalink.